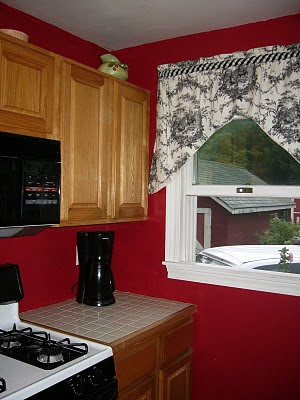 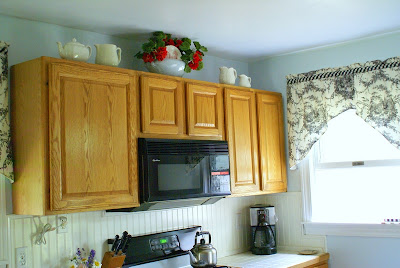 I like the color so much that I hate my grungy cabinets a teeny bit less. My goal is to paint them white this summer, I admit to a deep fear of how much work that will be. Will it turn into the project that ate my summer? Will I have the guts/time/gumption to actually do it?  I'll let you know. Until then, I'm sitting at the counter staring at my new color and dreaming of more ways to primp this space.
Have a great weekend:>)
Posted by Kathleen Grace at 7:33 AM 39 comments:

I don't know if I have told you this, but this man is my life.  He loves his girls and they adore him.
They took us to the park today with a delicious picnic they put together to celebrate Fathers Day. Mr. serious pants doesn't like to have his picture taken though. 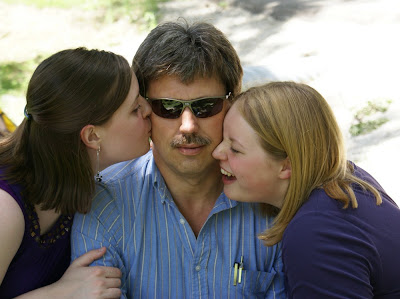 It is sometimes all he can do to hold it together and not smile, but with his iron will he forces his face into submission. No smile here. 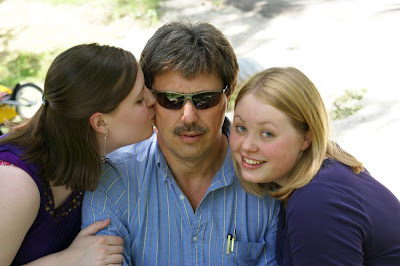 But wait...what is this? Is the iron will crumbling? Can he hold it together or will his girls coax a little smile from their stoic and serious dad? 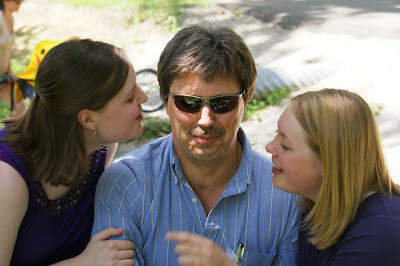 Ahh yes. There is the sweet smile we all love.  The iron will crumbles:>) We love you to the moon and back sweetheart!  My own father was not around, I had a stepdad who was, at best, abusive, so the love that my sweet man shows his girls (and me), is priceless. It means the world to me and to them. I sometimes think that God gave me Earl to show me what real love looks like.  It looks like this. 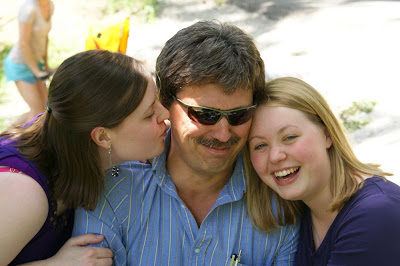 I thank God for this man every. single. day.
Posted by Kathleen Grace at 6:37 PM 27 comments:

Oh happy day! Last day of school , which means this Lunch Lady gets a couple months off. Not great to go without the paycheck, but since I have to, I am going to admit that I am so glad to have the summer off. I will still be taking college courses (guess who made the Deans List last semester?) but having the morning to get things done will be such a blessing.
So I spent the last 3 hours cleaning the school kitchen and came home to.....you guessed it, a messy kitchen of my own. I don't think I can deal with it right now. Maybe after a nap, or bright and early tomorrow morning. I know, I'm such a slacker. 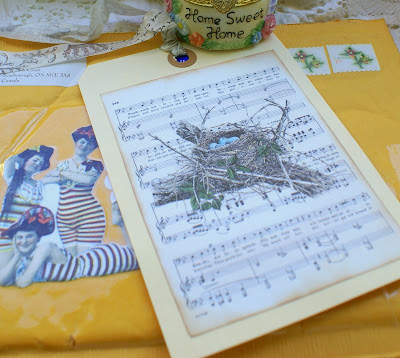 I also came home to the cutest package in the mail.  A little somethin, somethin, from my friend Sherry at Bella Rennie.  A wonderful artist who makes gorgeous cards and tags and other things. You can find her shop here and on my sidebar.  Look how cute she made the envelope! The tag has the prettiest graphics and ribbon and it is postcard size so if I wanted to send it to a friend I could write something lovely on the back and send it right out. I think I'll keep it. If I need one for a friend I know where to get another.
Love the nest. And speaking of nesting, I have a summers worth of cleaning and decorating and organizing to do. Projects to finish, projects to start and just the general list of housework to do. The very thought of it all is so exhausting that that nap is sounding better and better. What do you have planned for the summer?
Posted by Kathleen Grace at 4:06 PM 23 comments: 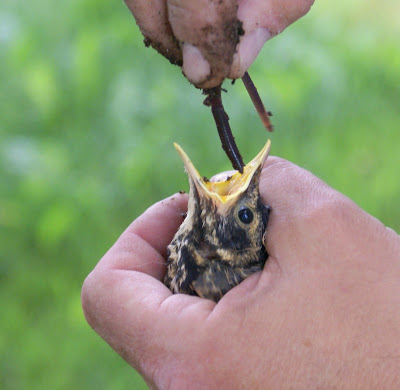 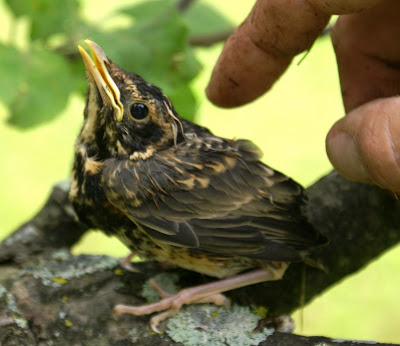 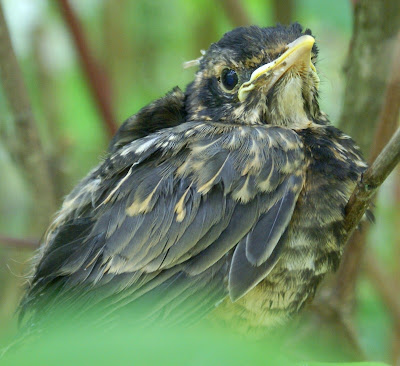 I love baby birds, don't you?
Since writing this, I haven't seen the little robin in our yard again. I prefer to think he finally figured out how to use his wings and is seeing the world:>)
Posted by Kathleen Grace at 2:37 PM 29 comments: 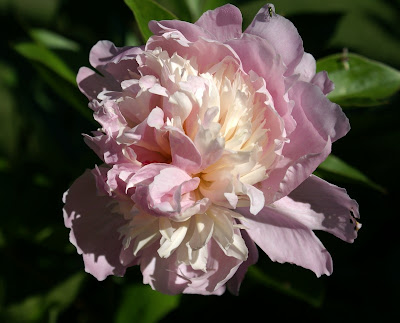 I hear talk of summer, and beaches, and hot sticky days filled with picnics and pools. 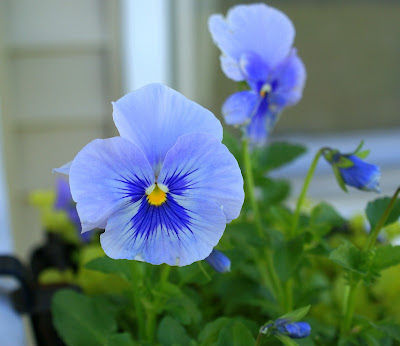 But I haven't finished with Spring. The soft green after the bitter cold. The tender buds unfolding. The joy of the first flower. 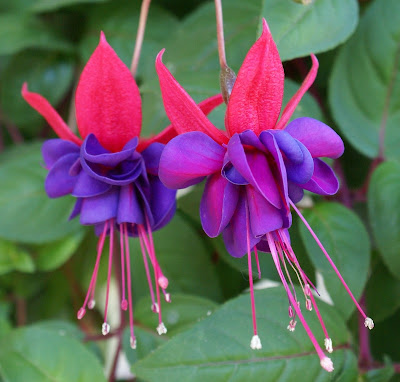 Summer is fine, but I think I will linger in spring just a few more weeks.  Can it really be June already? 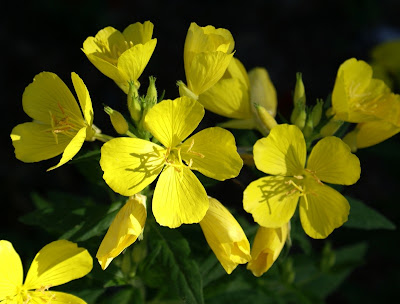 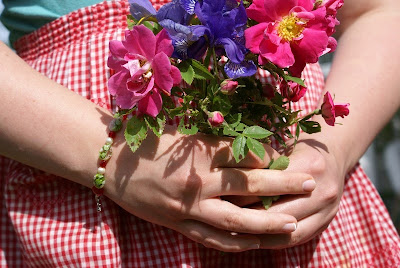 Why? Because when you least expect it they delight you with the beautiful things they do.  I came home last week to a sweet surprise in the mail from my friend Trish. A pretty bracelet and a card with well wishes and love. It made me smile. I love this beautiful surprise and I love that Trish thought of me and made me something special. Just because. 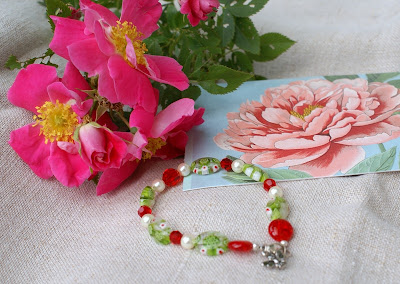 With my favorite colors no less. Thank you Trish!
On the home front, I have one more week of this semester and then a two week break. Best of all (kind of) my school job ends for the summer a couple days later so I will get a real break for most of that time. I have a dress pattern I want to sew and a purse and gardening to do. I might try to fit in painting the kitchen. You have no idea how badly I have wanted time for these projects! It may not sound like a break to you, but I would be so excited to get some of these things done!
It is beautiful weather here so far (rain forecast for later) I am heading out to school to finish some projects that are due this week. I hope you all have a wonderful weekend! See you soon:>)
Posted by Kathleen Grace at 9:32 AM 19 comments: