Earl and I have a Saturday morning ritual that we look forward to all week. We reserve Saturday for coffee out at our favorite coffee shop (Panera!) and we don't rush.  It's our time together to plan for the upcoming week and reconnect.  After a long and stressful winter cooped up in the house, I wanted to surprise my sweetheart with a weekend away.  So, Friday while he was out of the house I packed our bags and stashed them in a separate room.  I couldn't put them in the car because we were headed out later that day to celebrate Lauren's birthday.  I had to wait until he was asleep Friday night to sneak the bags out to the car:>) Then I laughed myself to sleep.
The next morning after coffee I told him I had planned a little adventure and that we were headed to Marine City, about an hour away. He was dubious. He had work planned. I could tell he needed to get his head around it. To his credit he did.
Marine City is on the East side of Michigan. It is on the St. Clair River and you can see across the water to Canada. The East side of the state doesn't get as much press as Traverse City and the west side, but it has some beautiful places to visit and is so much less crowded. It's also close to us so it was perfect for a quick trip.  I had searched for a B&B for the night and found one called the Heather House that was right across the street from the river.  It was beautiful and the hostess, Barbara, was one of the most accommodating and enthusiastic hostesses I have ever met. The house was amazing. Owned and decorated by Barbara's retired parents, and if you are looking for your own B&B, it's for sale! 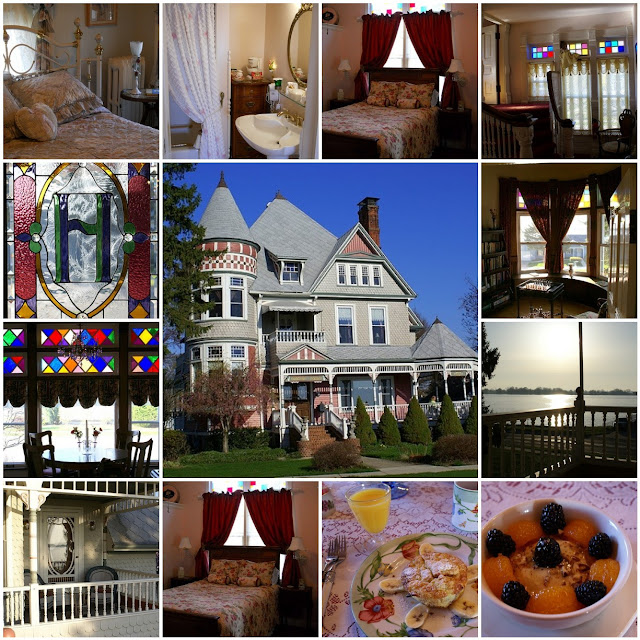 Loaded with stained glass and beautiful details, it was a dream to stay here!  Every room has a private balcony, ours overlooked the river and we spent Sunday morning before breakfast on the balcony watching the sun rise and the ships pass with a carafe of coffee. Did I mention the weather was perfect this past weekend? It was. *sigh* everything I hoped it would be. Sunny and warm.  Who would think one day away could be so relaxing? We spent Saturday perusing the antique shops in town and took in a movie.  We also found our favorite restaurant ever.
EVER.
I'll tell you about that tomorrow because it deserves it's own post.  In the meantime, I hope everyone had a wonderful Mothers day!  I know I did. I got upcoming shopping trips with my girls for Mothers Day, who wouldn't love that?
And how was your weekend?
Posted by Kathleen Grace at 6:14 AM