The Story of My Life, Part 4

So there I was feeling a little confused.  I actually liked the kiss, but I'm a girl who sticks to her guns. I wasn't going out with him and that was final!

Fast forward to February and my old Chevy Nova needed an oil change.  I happened to say something about it to some friends and the next thing I know Earl is volunteering to change my oil for me.  For pity's sake the man would just not give up!  Of course, my thought was if he wanted to crawl under the car in the snow and change the oil he was welcome to do it.  And he did!  That dark haired, blue eyed boy changed the oil in biting cold and snow. In fact, he forgot to put the oil plug back in after draining the oil and had to run to the store for more oil and crawl under the car a second time!

I can't believe I didn't anticipate what came next. I should have seen it coming a mile away.  Nothing had deterred Earl from asking me out over and over again for 6 months.  What made me think he wasn't going to do that again? I don't know. You would think he would be so over me by now, but of course he does something sweet like working on my car in the freezing cold and then shows up at my door again with a smile and the offer of dinner. 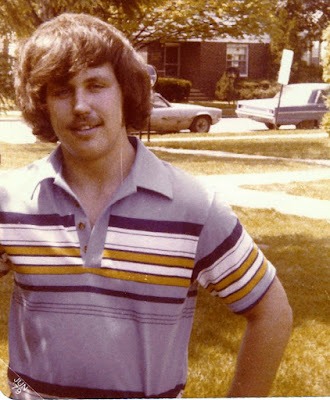 Now while I may sound like a cold and heartless girl so far in this story, (and later in this story!) I really am not.  I felt a twinge of guilt for allowing him to change the oil in those conditions and I just couldn't bring myself to say no this time.  I thought I would give him one date and be done with it. We would be even and that would be that.

Later that week he picked me up at the door of the dorm, I wore a black satin shirt that I had borrowed from a friend and jeans. I had actually gone to the trouble to wear make up and fix my hair, Why? Well the poor guy had worked so hard to get a date I thought I owed it to him to look my best right?  He took me to a nice steak house in town and we sat over dinner for a very long time discussing where we saw our lives going, what we wanted out of life, what kind of house we each liked best, and so many other things.  It turned out we really liked a lot of the same things.

We eventually headed back to the college, he parked the car and we talked for a little while, and then he leaned over and kissed me good night.

To be continued....  The Story of My Life, the end...and the beginning.

Posted by Kathleen Grace at 6:37 AM