The Story of My Life Part 3

I don't remember a time in my life when God was not real to me.  I remember saying my prayers as a tiny child and my absolute belief that someone heard them.  I have felt God's prodding, leading, whatever you want to call it on many occasions. Faith is important to me, which is why one of my requirements for a future husband was that he share that faith.  Prayer is a big part of that faith and so one night, as I sat on my bunk in my room, I prayed that God would help me find my future husband. 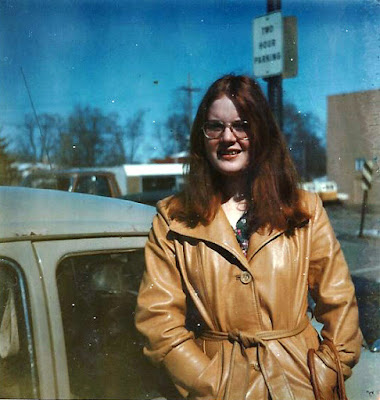 I mentioned earlier that I had seen bad marriages. Both were in my own family. My mother and father divorced when I was 3, my father wasn't around very much.  In fact, my mother was usually in court trying to get him to pay his child support.  While my sister and brother and I dressed out of the Thrift shop, (I was so ahead of my time!) my dad was enjoying trips to Europe, cruises and his lake house with his new family.  My step dad was a controlling slave driver with a mean mouth and a wicked backhand. I am at peace with my dads now, I have moved on from the anger I used to feel. It was a long process but it is behind me.  In college I was determined to not make the wrong choice in a life partner. I determined that I would use my head before my heart in choosing a husband, and the first step in that was making my list.

And so it was that one night in the fall of my freshman year I sat on my bunk in my dorm room and prayed that God would help me find the right guy to share my life with.  It was a prayer I had prayed many times and God and I were having a nice conversation when suddenly that "still, small voice" that people often attribute to God whispered, "Earl Miller" in my ear.  I froze. I knew that name was not my own thought because at the time I was still not into Earl at all. Not at all. I could almost feel God smiling in amusement.  I think God has a sense of humor don't you?  Would he have made us able to laugh and find things amusing if he couldn't?   I know this will sound strange to some people, but it was very real to me.  I was a little miffed at the name that came to mind and promptly ended the discussion. I am sure God was laughing because he KNEW how it would all turn out.
At this point Earl had kind of given up on asking me out and started dating a girl named Anna.  Poor Anna, he wasn't asking me out but every time I came into a room his attention turned from her to me.  I was taking a lot of art classes and one of my assignments was to draw a series of perspectives on hands.  I needed a hand model and so I went out to the Muffitt lounge to see if there was anyone there I could use.  Guess who was in the lounge?  Earl and Anna.  I asked if either of them would let me draw their hands and he jumped up and volunteered.  As I drew I couldn't help noticing what nice hands he had.  It took me a couple hours to draw his hand in different positions and at some point Anna walked out of the room. Neither of us noticed.

By now it was winter, January term is a short few weeks and as a student you could take that term off, take an accelerated class or join some of the ministry experiences the school made available. Earl joined up with Wandering Wheels and headed to Florida where he spent those weeks riding his bike a and helping at various churches.  I'm not even sure what Wandering Wheels did, but when I ran into him when he returned he was fit and had turned a nice golden color.  I remember thinking he looked very handsome!  Did that change my mind about going out with him? No.

As a matter of fact, one night I was on the steps in the entry way to the girls dorm when he came into the building, stood a few steps below me and asked me out again.  I looked at him and told him,

"I wouldn't go out with you if you were the last man on earth."

His response was to jump the last two steps between us, take me in his arms and kiss me!  I turned on my heel and walked onto my floor and into my room.  I was kind of mad....but I also really kind of liked it.

Posted by Kathleen Grace at 6:27 AM