I'm willing to bet most of us have a pinterest board somewhere just full of luscious looking desserts and recipes that we plan to try. I have several.  Not that I am necessarily the one who will try them out. You know I live with a man who bakes right? I am one lucky girl:>)
So, back in January our church had a silent auction to help fund a mission trip to Africa for a group of our young mom's. They are going to help out with some building projects, and they are there right this minute doing what they can.  Earl decided that he would auction off a Dessert of the Month.  It would give him the chance to try some new recipes without the downside of us gaining a ton of weight by eating all those delicious new recipes. The winner gets a dessert each month for a year.
Enter the Pinterest board. Oh he has had fun! The lucky bidder is happy as a clam every month and we get to try some new goodies without being overwhelmed with too much to eat.
Aprils D.O.M  were S'mores cupcakes.  He printed off the recipe, whipped up a batch....and they were so bad he had to throw them away. I kid you not, it was not cooks error, there was something wrong with those cupcake. Very wrong. 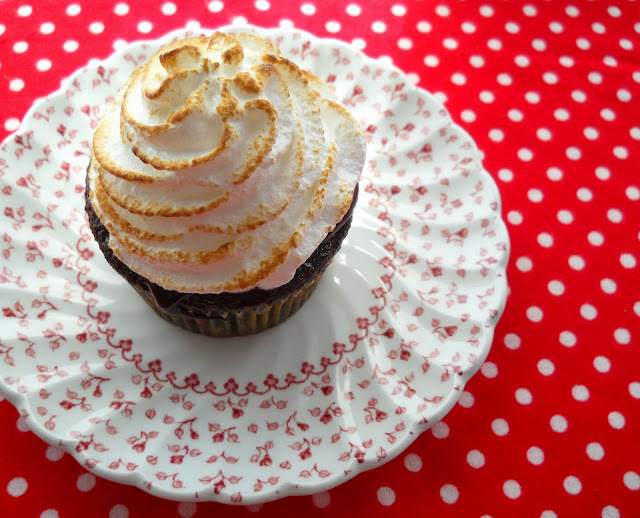 Proof that just because something looks gorgeous in a photo it doesn't mean you will want to eat it.
But he liked the concept, it was a great concept. Graham cracker crust, chocolate cake, melty chocolate ganache on top of the cupcake and a light, fluffy meringue on top toasted to perfection with his creme brulee torch. So he switched out the chocolate cake recipe for a new one and used his favorite Italian meringue recipe for the top.  Success! These are so good, and not as much trouble to make as they sound like. Sure, they have several components but none are hard to make and the results are worth it.
The cake recipe itself comes from a website called The Best moist chocolate Cake, the batter may be the thinnest cake batter I have ever made, but it works and it really is moist and the chocolate flavor is superb. Use whatever graham cracker crust recipe you have and just put a thin layer in the bottom of the cupcake paper, for the ones I made today, I didn't even bother and I didn't miss it, but if you must have it, know that crushed graham crackers sprinkled over the ganache would work too.
The ganache is simply a 10 oz package of chocolate chips and a cup of heavy cream melted together while you stir it on top of the stove. Easy as can be.  Bake the cupcakes, cool, dip the tops in the ganache let it set up a bit and pipe Italian meringue on top in big swirls. The recipe that Earl uses is  Julia Child's Italian meringue, but you could probably put a dollop of marshmallow cream on top and toast it. Use a little kitchen torch and these are ready  to share. Victoria declared these the best cupcakes that she had ever eaten, I don't know about that, but they are pretty darn good:>)
Have you tried anything from your Pinterest recipe board lately? Any failures or favorites?
Posted by Kathleen Grace at 1:35 PM