A few days late to be sure, but why not wish happiness on more than day one?  I am seeing so many who have chosen a word or resolution, I must be a slacker extraordinaire, because I tend to think a New Year should be a blank slate. A time to let the pressures of last year fall away leaving the white nothingness of a clean sheet of paper to write my life on. Oh I do wax poetic.  Truth is I know I am not one for feeling pressured to chose a word or affirmative life action, so I tend to sit back and give myself the first few weeks off.  No pressure or expectations. It's actually a great way to start the year :)

Just to catch up on what has been happening, which is precious little to tell the truth, we spent New Years Eve with friends and actually left by around 10pm.  Both exhausted for some reason and just not up to hanging on until Midnight. We were well asleep by the time the New Year crept in, but were awakened by the mortars going off next door. No rest for the weary apparently, but I just realized I even freed myself of the expectation of staying awake until New Year.  I rock lowered expectations.

The next day was the big extended family Christmas party and Earl made his yearly Bushe de Noel, this time in the form of a birch log.  The outer "bark" is white chocolate with dark chocolate knots and details. The top is meringue piped in circles, baked and laid on top of the cake to simulate  the inside of the log, and the cute mushrooms are meringue too.  The cake itself is yellow cake layers with chocolate ganache filling. It was as tasty as it is pretty.  I always love seeing what he will come up with :) 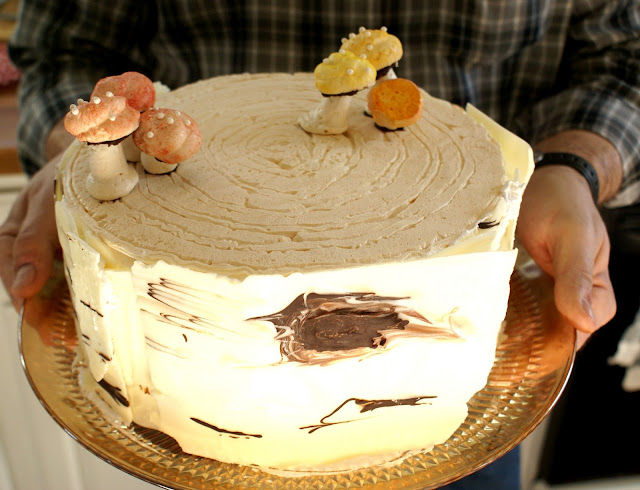 You may remember my not so subtle hints for a certain traveler to think of Christmas while they were in England this autumn and pick up an Emma Bridgewater something for their mama.
Well the ever so gentle, almost subliminal suggestion worked beautifully and this little gem was waiting for me under the tree.
It came with a darling Emma Bridgewater towel too, but the message on the mug just touches this mother's heart :)

I spent yesterday taking down the Christmas decorations. As much as I love the lights and fun of the Christmas décor, something about January calls for calm and quiet. It may be the only time of year that I actually wish I had an all white house.  At the moment it almost feels too blank and empty after the tree and lights have been removed. I have a very hard time with "winter décor" because I hate winter. I am over it completely by January 2.  Anything winter themed is not appealing at the moment. I am working on keeping some of the mercury glass and white decorations out in an attempt to spice things up. So far I have one corner of the living room redecorated. 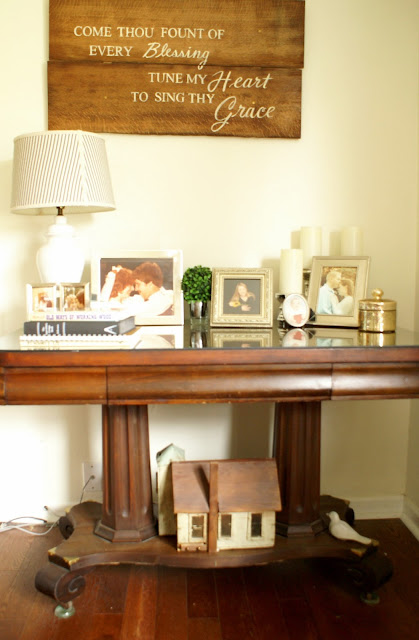 Yes, I know the cords show, part of my easy going January attitude ;)  This is our library table, because this family librarys a lot.  Books tended to be strewn over every flat surface of the living room until we found this gorgeous table for a steal at a garage sale.  Now the books go here. 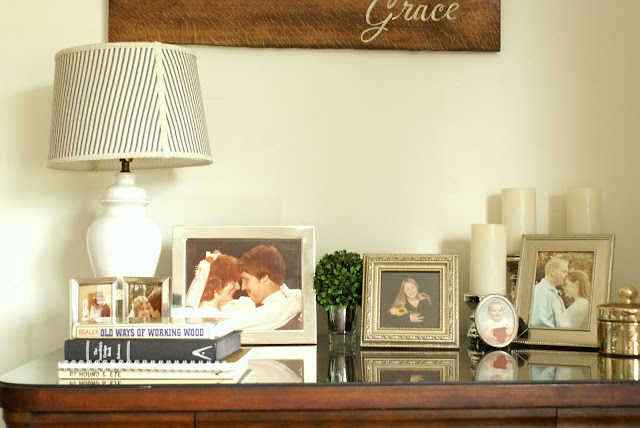 Family photos, a few silvery accents and some battery operated candles that are on a timer so I don't even have to light them.  Some of these items will eventually be moved as there are a few large items of furniture that I will be taking out of this room in preparation for a new flat screen tv that is coming soon.  2017 will see some improvements in the house, as most years have.

Now I am off to strip the old wallpaper off the walls in the back entryway! The new wallpaper is on it's way and with a little paint and elbow grease I will have a sparkling bright entry in a week or so.

I hope your New Year is going smoothly, and happily.  Ease up on yourself and enjoy a few weeks of possibilities and low pressure! And thank you to all who have been stopping by for so many years.  It makes me smile to read each comment!