I interrupt this blog break on a mission of mercy.  Sweet Kim of Daisy Cottage is feeling under the weather and has requested the recipe for my home made chicken soup.  This soup is my secret weapon against colds, flu and just about anything you can name that makes you feel bad. I've driven two hours to take it to my daughter who was sick at college. My mother-in-law asks for it when she is sick. I should be famous.
Now chicken soup is one of the simplest things to make, and no, I'm not talking about opening a can.  It all starts with a roasted chicken. That is what gives the broth it's rich flavor. you can't make broth by boiling raw chicken, you just can't. If you don't want to go to the time and trouble to roast your own, run to the store and pick up one of those rotisserie chickens that everyone has.  I got this one at Kroger and it was on sale. I'll get at least two meals from it because I use the bones for broth.  Always, always make broth if you buy these!  You can freeze it in one cup plastic containers and you will have it whenever you need it. 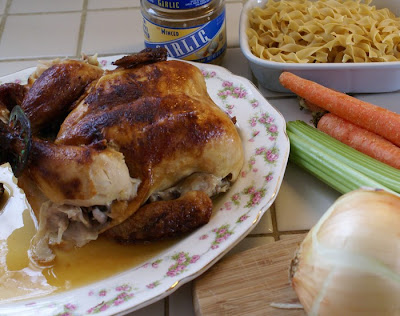 These are the ingredients you will need.  A roasted chicken, onion (I used a sweet onion, but a regular yellow onion is just as good), carrots, celery, chopped garlic, and whatever kind of noodles you like. I like the skinnier noodles. 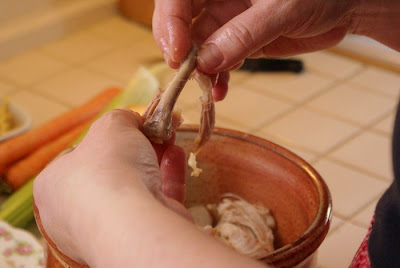 Remove all the meat from the bones.  Take the skin off and throw it, and all the bones, into a separate pot. The skin does have fat, but that is where a lot of the flavor is. If you want, you can chill the broth when you are done and skin off the fat. It's easy. 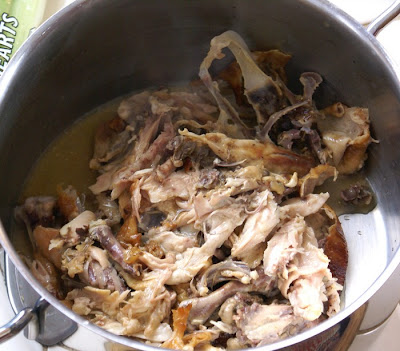 Add just enough water to the skin and bones to barely cover them. Cover and simmer on a low setting for a couple hours.  This is all you need. Don't add anything else to the broth. 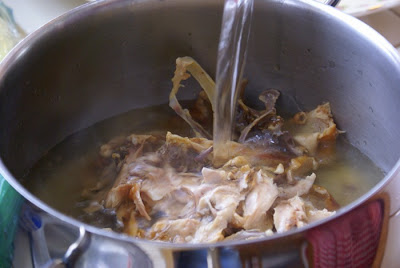 While the broth is simmering, add about a Tablespoon of olive oil to a pot. I am going to warn you right now, I cook the way my grandmother did, is everything measured exactly the same every time? Goodness no, this is so easy you don't need a real recipe, trust me. This isn't rocket science, it's just soup,  just eyeball everything and  it will be great. 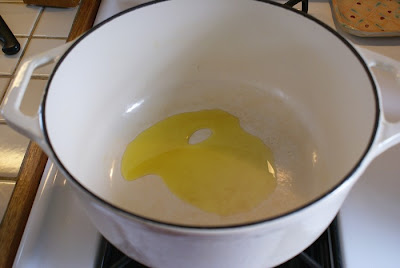 Heat your oil a bit and add one small to medium chopped  onion , a couple stalks of chopped celery, and about a half teaspoon of minced garlic.  Here is where you can fudge a little. If you like onion or celery or garlic a lot, add a little more! 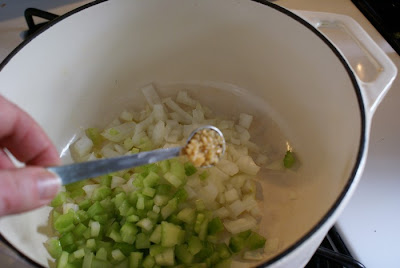 Cook the onion, garlic and celery for about 5 minutes or so until they start to get soft and brown a little bit. 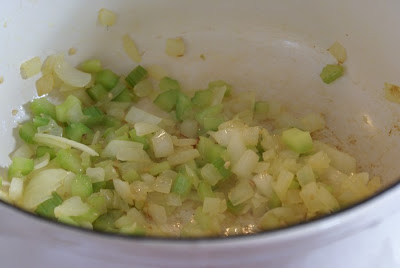 Add  about 8 cups of broth, and sliced, uncooked carrots. Simmer for about 15 minutes until the carrots start to get soft.  I used 2 regular size carrots but I could have used more because I love carrots in my soup. Add whatever makes you happy. really. 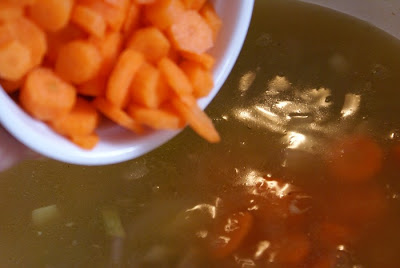 Now I happened to have some home made broth already on hand, so I kind of cheated, but this is why you should always use the carcass of your roast chicken for broth, that way you won't have to wait a couple hours while it simmers.  Below is a comparison, the home made broth is on the right and canned broth is on the left.  You can see how much richer the roast chicken broth is and the flavor is so much better. It isn't loaded with as much sodium either.  Of course, if you have some canned broth on hand and want to use it, go ahead!   I didn't have quite enough home made so I added a couple cans of broth to the soup to have enough. Whatever works. 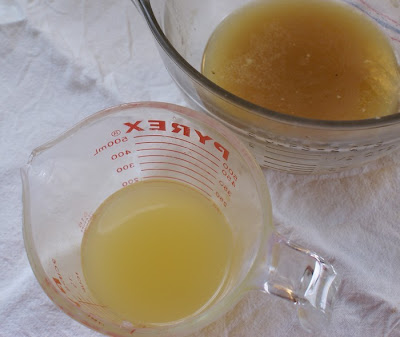 Once the carrots are getting soft you can shred up some of the chicken that you removed from the bones, or chop it coarsly. It's all a matter of preference.  The chicken is already cooked so to keep it moist I add it at the end and don't boil it to death, that makes it dry. I hate dry flavorless chicken in my soup. Don't you? 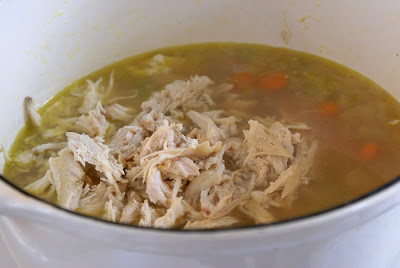 Stir it up and let the carrots finish cooking, about another 10-15 minutes. 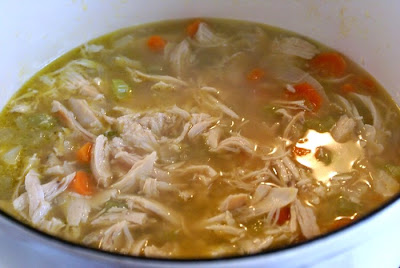 Now add your noodles, I added about a cup. The noodles swell as they cook so take that into account. Once again, use the kind you like and if you like less noodles, use less noodles.  I like a nice thick, hearty soup.  So I add enough vegetables, meat and noodles to really fill my bowl. Cook the noodles til soft, about 10 minutes. 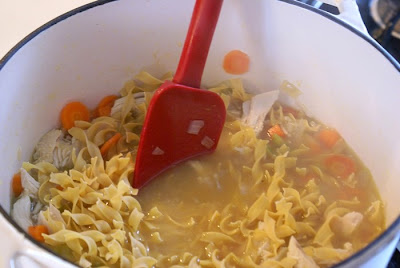 Add salt and pepper to taste and then you're done! So simple but real homemade soup is just what you need when you are sick.  When my mother-in-love was going through chemo she lost her appetite. We begged her to eat, the doctors and nurses begged her to eat. It's one of the side effects of the chemo though and she just couldn't even stand the thought of food.  One day she told me that the only thing she wanted was my soup. I ran home and made it. The hospital froze it in small portions and she ate it! I was so happy:>)  This soup will cure what ails you, as my grandmother used to say.  I know a few of you have been battling upper respiratory infections and colds.  This recipe is for you. If I could I would make it and bring it to your homes, this is the next best thing. 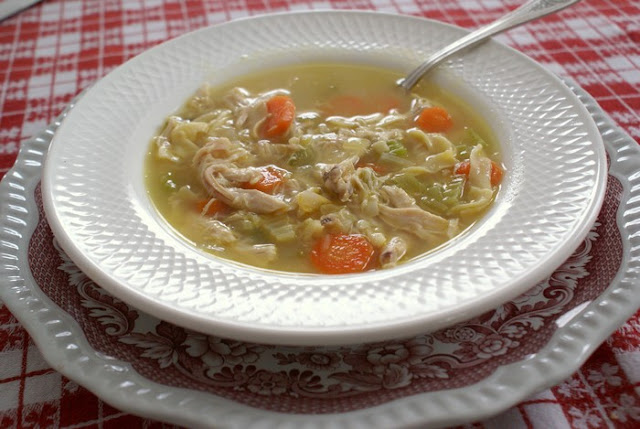 So this bowl is for you Kim and for Dolly and anyone else who has been feeling sick.  I'm sending big hugs and wishes your way for feeling better:>) I would send you flowers too but blogger won't let me add one more photo to this already long post!  Just know that I hope you feel better soon:>)
XO
Kathy

Oh, by the way, when your broth is done let it cool a bit and then pour it through a strainer and discard the skin and bones, but you knew that right?:>)
Posted by Kathleen Grace at 4:48 PM