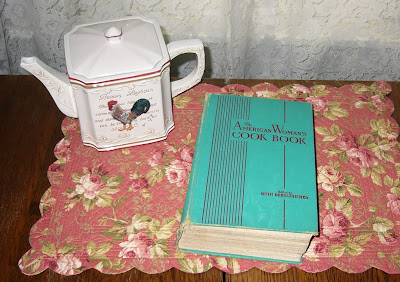 I just wanted to show everyone the cool old cookbook I found at the youth garage sale Saturday. It is called the American Woman's Cook Book. I believe it was originally printed in the UK because it has some interesting spellings of words and some parts of the book are copyrighted by a company in England. Anyway, it is from 1938 and has some of the most interesting recipes, such as cream cheese salad which amounts to pressing cream cheese through a ricer onto lettuce and adding french dressing. Hmmmm... or the recipe for wedding cake which calls for pounds and pounds of raisins, currants, almonds,and citron, 20 eggs, a cup of black coffee, a cup of molasses and a glass of tart jelly among other things. Yes, that was a wedding cake! Or how about some marshmallow fig cakes? LOL, I don't know how many of the recipes I will try from this book, but it is certainly entertaining to look through and I do see some old fashioned recipes for cookies and cakes that I might try. Just not the wedding cake! 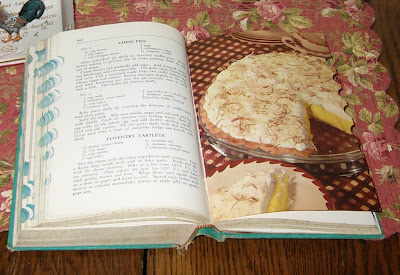 Here is a picture of coconut cream pie that looks tasty. The explanation of the color plates in the book explains that the color photos are courtesy of the Irradiated Evaporated Milk Institute. Yum-O!
Posted by Kathleen Grace at 7:19 AM