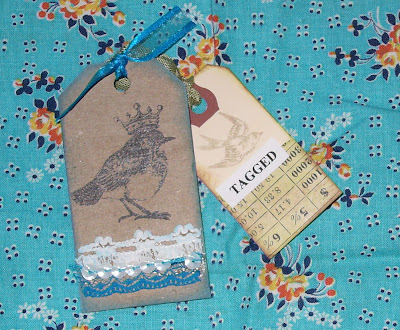 I have been tagged by Tiff at Folded Gingham. Wow, that's a new one. Apparently I have to think of seven weird things about myself to tell everyone. I should throw this out to my friends & family, I am sure they could come up with way more than seven things, and much more quickly too! Hmmmm...

1. I paint at least one room in my house every year. There have been a few years I missed but not many, I swear the rooms are getting smaller! And usually it goes something like this, I wake up, look around pull all the furniture to the middle of the floor, go buy paint and have it done by that evening. It helps that I have a small house (that's why I call it a cottage).

2. Not a really weird thing but not the "norm", I home schooled my girls for 5 years and loved it. I wouldn't trade that time with them for anything. I started it about 11 years ago and it was a big step off the beaten path for me, but so worth it.

3. I pick up stuff by the side of the road and re-do it for my house. I thought this was weird until I began reading more blogs and found out how many kindred spirits there are out there.

4. I own chickens, not strange if you live out in the country, but I am not so much out in the country. I don't live in a subdivision, but an older town that has gradually filled with subs and is now very populated. Lets just say I don't know anyone else in the area that has chickens.

5& 6. My husband says the only fault I have is that I don't screw lids down tight when I am done with them. I don't know which is the strange thing, not screwing the lids on tight or my husband thinking I only have one fault. I think that might actually be two things!

7. My oldest daughter says it's weird when I dance around the living room to her music. Can't help it, sometimes the music just takes me and if I can't dance like a weirdo in front of my family then where can I?

Here are the rules...each player starts with 7 random Facts/habits about themselves. People who are tagged need to write on their own blog about their seven things, as well as these rules. At the end of your blog,you need to choose 7 people to get tagged and list their names. Don’t forget to leave them a comment telling them that they have been tagged and to read your blog!Have fun!!!.

I tag...
Daylily Lane
Under A Blue Moon
Because I Said...
My Messy, Thrilling Life
Homespun Living
The Draper House
Lallees Cottage

Hey friends & Family, can you think of any weird things about me?
Posted by Kathleen Grace at 7:17 PM